Plan Three is a post-grunge band formed in Stockholm, Sweden in 1999 by singer Jacob Lovén, guitarists Tommie Hammar and Mathias Garneij, drummer Andreas Malm and bassist Mattias Willis. After some years, the bands long-time producer and songwriter David Clewett was recruited to the band's official personnel as synth player and background vocalist. They are influenced by the American alternative rock/post-grunge scene as well as electronic and classical music, the combination of which gives the band their unique sound. 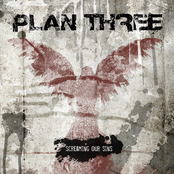